On Sunday, March 13, 2016 members of  of the Delaware Valley for prayer service in the Sikh Gurdwara of Pine Hill.  Prior to, and after the service, Officers shared a meal in the attached langar.  The langar, or “free kitchen” is designed to uphold the principle of equality between all people of the world regardless of religion, caste, colour, creed, age, gender or social status.

Team Pine Hill represents the members of the Pine Hill Police Department in the Police Unity Tour.  For the second year, Team Pine Hill will be joining officers from across the country in honoring Officers who have made the ultimate sacrifice.  The 2016 Police Unity Tour will begin May 10, 2016.  Over the course of three days, Officers will bicycle from New Jersey to the National Law Enforcement Officers Memorial in Washington DC to raise awareness of Officers who have died in the line of duty and honor their sacrifices.

Thank you to the congregation of the Guru Nanak Sikh Society for welcoming Team Pine Hill in their prayer service and langar. 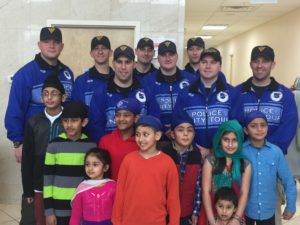 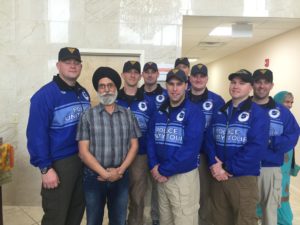