Congratulations Les Gallagher Jr. and thank you for your service!

On Monday, July 10th Les Gallagher Jr. was recognized for his dedicated years of service to our country and also the residents of Pine Hill. Congressman Norcross presented Les with a flag that has flown with honor over the Capitol Building in Washington, D.C. Les was also presented Proclamations by Freeholder Director Cappelli Jr. and Assemblywoman Patricia Egan Jones.

Les moved to Pine Hill in 1959 after his father, former Mayor Les Gallagher Sr., separated from the Army. Upon graduating from Overbrook High School in 1976 he entered the USAF, where he served honorably for over 20 years, retiring in June 1997. Les has been an active member of Pine Hill American Legion Post 286 since returning to Pine Hill after his USAF service.

In addition to all of his commitments to the Borough residents, Les is employed by the Borough in the Tax Office, where he is always willing to lend the helping hand.

Congratulations Les and thank you for a lifetime of service, not only to our Country but the residents of your hometown. 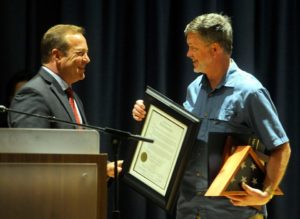